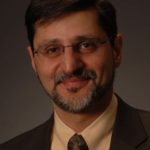 Majd Alwan is Senior Vice President of Technology at LeadingAge and Executive Director at the LeadingAge Center for Aging Services Technologies (CAST). Prior to joining CAST, he served as an assistant professor and the director of the Robotics and Eldercare Technologies Program at the University of Virginia’s Medical Automation Research Center. Majd’s research interests there included passive functional and health assessment, biomedical instrumentation, medical automation, as well as eldercare and assistive technologies. As a volunteer, he chaired the Funding Aging Services Technologies committee and the Pilots committee for CAST.

Majd is a Senior Member of the IEEE’s Engineering in Medicine and Biology, and Robotics and Automation Societies, and a member of IEEE-USA’s Medical Technology Policy Committee and the Geriatric Care Workgroup. He also serves on the Alzheimer’s Association’s Work Group on Technology.